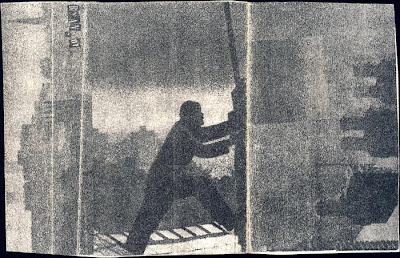 Terry Waite ar Asid existed around the Mold / Ruthin area between 1988 and 1990. They appeared on a split flexi-disc with Ffa Coffi Pawb, contributing the song Chicken Jane and also released this 5-track cassette EP in their own right.

Their irreverent, ramshackle and confrontational approach was a welcome antidote to a Welsh scene that was becoming ever more focussed on polite TV and radio appearances, something the group's material virtually ruled out, although they did make a memorable appearance on the S4C show Y Bocs (see below).

The high point of their career probably came on February 25th 1989, when they supported My Bloody Valentine at Olivers, Chester. Such a high profile was not to last however, and following a gig in Bangor Football club with Fflaps on 20th January 1990, they split, promising to reform for a one off performance on the day that Terry Waite was eventually freed. This was never to happen though, the group citing their mental state at the time, claiming not to be allowed out of Denbigh Mental Hospital to fulfill their promise. A recent statement claimed that some of them have since recovered and are still considering a reunion.

As can be seen from the scan above, the cover of the EP doesn't give much away as to the contents - no track listing, group line-up, or even the band name! A little research and memory jogging turns up the following names of band members, although three of them seem to be drummers, so probably not all members simultaneously!

Singer Llŷr Ifans (sometimes Evans) went on to a successful acting career, co-starring with his brother Rhys Ifans in the hugely successful Twin Town, as well as appearing in Very Annie Mary and an episode of The Bill. Gwion Llwyd went on to form cutting edge electronic group Mescalero with Gwern ap Tudur and Douglas Jones of the legendary Crisialau Plastic and is now a respected sound engineer. Al Edwards went on to drum for two of the most acclaimed Welsh groups of all time, Datblygu and Gorky's Zygotic Mynci amongst many others. Not sure about the others, but they're doubtless also doing great stuff... if you know, let us know too!

Likewise with the track titles... the three songs on side A seem OK, but not sure about the other titles, although track 4 is based on Kraftwerk's The Model musically, if not lyrically. We seem to remember the group having a song charmingly titled Alun Llwyd (Wancar) but don't think it's one of these... all help is welcome! 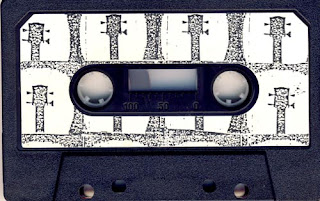