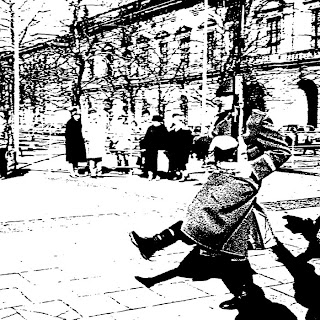 In response to a number of requests, we will be uploading the complete official recorded output of Fflaps this month, beginning here with their debut 7" EP on Recordiau Anhrefn.

Having played their very first gig in Bangor University Jazz Room on 24th April 1987, Fflaps became actively involved in bringing together the Welsh and English language music scenes in the Bangor area over the following months, working alongside such tireless legends of both scenes as 4Q and Anhrefn. This cultural mélange injected a new vitality into the scene, and by the time Anhrefn's Rhys Mwyn invited the trio to record an EP for his Recordiau Anhrefn label less than five months after their first appearance, the group had already played twenty gigs around Wales as well as one in London and one in Wigan.

Rhys booked the group into Foel studio in his remote mid-Wales hometown of Llanfair Caereinion for a day's recording on 4th October. The group were especially excited about this arrangement as it was the very studio where such seminal classics as The Fall's Fiery Jack, Peter Hammill's "Over", Young Marble Giants' Colossal Youth, The Pop Group's For How Much Longer do We Tolerate Mass Murder?, Datblygu's Hwgr-Grawth-Og, My Bloody Valentine's Isn't Anything and Van Der Graaf's The Quiet Zone/The Pleasure Dome had been recorded. Fflaps arrived at the studio late at night on the 3rd of October, totally convinced that they were about to make a record that would join that prestigious list of classics.

They were greeted and entertained by the studio's owner Dave Anderson, the original bassist with both Amon Düül II and Hawkwind! This was the man who played bass on Master of the Universe and Archangel's Thunderbird - two of the pinnacles of human artistic achievement... and if that wasn't enough, he was also now in The Groundhogs! The group enjoyed a pleasant evening of drinks and anecdotes with the seventies legend before getting a good night's sleep in preparation for the following day's work.

Happily, the session went well, with engineer Brian Snelling putting the group at ease and effortlessly capturing their raw energy in a series of first takes. In addition to three of their own compositions, the group chose to record a Welsh language cover of The Slits' Love and Romance as an acknowledgement of their roots, but also with one eye on John Peel airplay, knowing that the song was a big favourite of the legendary Radio One DJ, who was also a big supporter of Welsh music.

The EP was released on Recordiau Anhrefn a few weeks later, in a sleeve designed by the group using photos Alan and Ann had taken during a recent trip across the Iron Curtain to East Berlin. This was to be the first of several engagements with the eastern bloc by the group as over the next few years they witnessed and documented the fall of the communist regimes in the region. The front cover depicts the changing of the guard outside the Eternal Flame Against Fascism (since renamed the Central Memorial of the Federal Republic of Germany for the Victims of War and Tyranny) at the the Neue Wache on Unter Den Linden, while the back cover depicts a street scene of a trio of east German skinheads on their way home after a night of drinking, captured in as blurry detail as they probably perceived it themselves.

The record did indeed catch the ear of John Peel, who played it quite extensively and invited the group to record a session, and it also gained several positive reviews in the music press of the time. The three original songs on the EP would appear the next year on the group's debut album in re-recorded form, but here we present the Foel Studio recordings, as they appeared on the original 7" EP.