Information is a bit sketchy about Krystalnächt. They were a gothy group based in the Holyhead area who played on the Anglesey and Bangor scene regularly between 1986 and 1988. Possibly the most notable thing about them from a historical point of view is that they were the first known musical project of the late Owain "Oz" Wright, who went on to greater fame as Rheinallt H Rowlands.

Oz was certainly the bass player of the group, but on the evidence of the recordings on this, their sole release - produced by Gorwel Owen - it sounds as if he well have also been the singer. The group also had a guitarist/songwriter called Huw and used a drum machine. On occasions, their manager and art director Linda Manning also played with the group, although possibly not on this release. If anyone has any fuller information about the group and their line-up, please let us know!


Krystälnacht played the legendary Pancake Day party / Andy Warhol memorial concert at Bangor Trax Club on March 3rd 1987, alongside Y Cyrff, The Lungs and Zod Maelstrom. Andy Warhol had died only days before on February 22nd. They teamed up with The Lungs again, and also Fflaps several months later for an event in Bangor University's Jazz Room on October 29th (see posters below).

Posted by the archivist at 12:45 No comments: 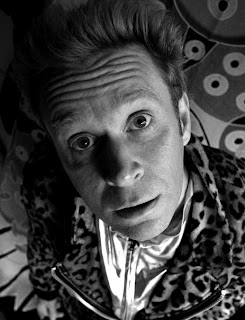 Here's something quite up to date for a change. Mark Windows was a crucial figure on the Bangor music scene during the first half of the eighties, playing with such seminal outfits as Go For It, The Creations, The Dekorators, A Silly Tree and Some Noise before moving to London to seek fame and fortune. He is often credited with having invented the cymbal-less stand up tribal drum sound found at the heart of Cut Tunes, having played with Gary Cut in A Silly Tree back in 1980. We have recently managed to track him down and found that he still is very much involved in music and in show business in general!

Mark still is based in London, where he runs a TV production company, making documentaries, often exposing corruption and conspiracy but also comedies, such as the wonderful 'Every Picture Tells a Story' in which he himself stars as a hapless Rod Stewart impersonator. He also starred as Johnny Rotten in the major production 'Twenty Four Hour Party People' in 2002.
This uncanny talent at impersonating pop personalities has also led to him developing the Glamtastic Rock Show, where he assumes the guise of a pantheon of top rock personalities (see video link below). He also occasionally performs as Mick Jagger in the Rolling Stones tribute act Stoned Again.

He is also still writing and recording his own songs, a selection of which appear below. They are often of a satirical nature and encompass a wide range of styles including Glam Rock, Hip-Hop, Britpop/Vaudeville and old school rave!

Check out his video channels here and here

He also has an excellent site at markwindows.com, where you can sample the full range of the man's talent... and even book his Glamtastic Rock Show for your own party!

Video for Wardrobe of Wonder:

Video for Abduction at Junction 5:

Posted by the archivist at 07:55 No comments: