Back in January, we featured the mysterious Miracle Cave's 1984 album "Turquoise Coal" from which we took our name. Since then we have managed to locate a copy of their debut release from the previous year. Once again, the album covers a wide stylistic range and again features one cover version among the group's originals, this time a version of Soft Cell's 1982 chart hit "Say Hello, Wave Goodbye". These two cassette releases comprised the group's entire recorded output, and they never performed live. The cover image for "Coping with Illness" was provided by Ghostriders / Megabats drummer Mark Thomas and featured a series of mystical esoteric symbols that Mark saw as representing the character of the group.As far as we know, it remains the legendary drummer's sole foray into sleeve design.


The Megabats played regularly around the Bangor area, and supported chart biggies Haircut One Hundred on one occasion and up and coming press darlings The Smiths on another (14th October 1983). Most of the group's material was written by Maeyc, some of which ("Flags", "Betrayed") had previously been aired in a different form by The Pinecones, and others would later be adapted for future groups - "Sunday Sunday" (not played at this gig) by Reinheitsgebot and "Australians" by Third Spain, all of who can be found elsewhere on this site.

Their organ-powered garage rock sound was at times reminiscent of The Blue Orchids or The Modern Lovers, but Maeyc's distinctive songs and vocals gave The Megabats a sound very much of their own, and the group really cooked live, driving audiences into a frenzy.

Very few recordings of the group have come to light, although one further live recording in addition to this one is known to exist but is yet to surface. Here however, we present a full length 65 minute headline set from the Students Union Jazz Room in Bangor, capturing the group at their creative peak.

In Summer 1984, Phil moved away, his University course having finished and the group disbanded, Maeyc and Ian joining up with Alan Holmes, Scott Saunders and Emyr Tomos to form Reinheitsgebot. After a couple of gigs however, Mark returned to the fold, replacing Emyr on drums in November 1984.

get it here
Posted by the archivist at 15:43 No comments: 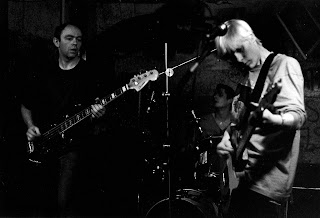 The legendary Bangor music scene of the early 80s threw up many short-lived acts who would ignite in one fleeting burst of incandescence before dissolving into the shadows of myth. Names like The Axolotl, Gentle Reminders, One Hour Later Over Iran, The Baudelaires, Fugitive Binoculars, The Legendary Mountaineers, The Bellman, Sharon Angstrom, Armchair Theatre and The Dekorators all come to mind, yet none seemed quite as elusive as Kärnarvøn Kästle, who played live only once, at Bangor's famous Glanrafon Pub on the 13th of August 1982.


The group stood out from many of the other names of the period by their eccentric policy of only rehearsing at sunset in the deserted Iron-age village of Tre'r Ceiri, on the summit of a mountain some 25 miles from their home. After carrying out this strange ritual three times a week for the month leading up to their gig, the group then spent an hour jogging around the streets of Bangor that evening before running straight onto the stage to perform. To further complicate matters, their set was then performed largely on instruments they hadn't previously played the material on, due to the obvious logistical problems of carrying them up the mountain - only the saxophones and trumpet had featured in rehearsal. Despite this the spiritual unity, telepathic intuition and discipline instilled by their rigorous routine almost paid off, and their performance teetered at times on the edge of competence.


Sadly this brave start was also to be the end, and all three members were shortly absorbed into Gary Cut's nascent Cut Tunes...... but that's another story.

get it here
Posted by the archivist at 07:55 No comments: