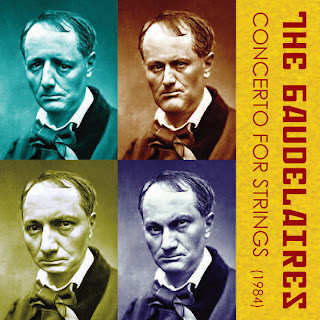 The Baudelaires were a short lived but unique group, existing between February and May 1984. In fact, the trio never decided on a name but when they were invited to support the legendary Cut Tunes at Bangor University on 29th March 1984, Gary Cut needed a name to put on the posters and so christened them The Baudelaires. This was to be the sole public performance of the group, who were memorably described by an audience member as "the worst group in the world ever".

Listening to the recordings made by the trio however, it becomes clear that the world in 1984 just wasn't ready for a group who operated so far outside the fashionable scenes of the period. The line-up of acoustic guitar, violin and bass sounded light years from the lyrical folk sound normally associated with such instrumentation, coming over more as a meeting between Sun Ra, Edgard Varèse and the Velvet Underground.

The group explored unorthodox harmonic and rhythmic structures, stitching together composed and improvised sections into an out-there post structural mélange of uncompromising wonderment. Although the trio were not averse to performing the odd song, their true strength lay in extended instrumental compositions such as the hour-long Concerto for Strings, composed and recorded in March 1984.