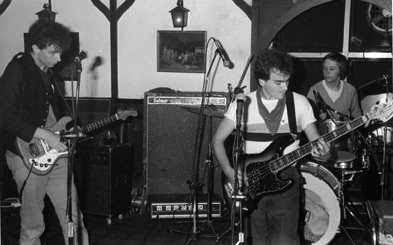 A Silly Tree existed for only a year, forming in July 1980 and splitting up in July 1981. In that time they went through a variety of different line-ups, initially as a trio of on bass, guitar and vocals, Alan Holmes on guitar and bass and Mark Creathorne on drums.
Gary and Alan were inspired to form the group while attending a gig by at the legendary club in Liverpool on December 1st 1979. The headliners' intensity and unhinged energy charged the duo with determination to take their own music more seriously, but it was support act Delta 5 that actually convinced them that they too had the capabilities of actually doing this themselves. Gary and Alan spent the next few months writing material, before a chance meeting with teenage drummer Mark Creathorne in the Glanrafon pub in Bangor completed the line-up. Mark had played in Some Noise, probably the first 'post punk' group in north Wales, but as they had recently fallen apart, Mark was looking for some fresh action... and A Silly Tree was born.This is the first documented recording of the trio, recorded in a room at the top of the tower of Pen-Y-Bryn Manor in Abergwyngregyn where Mark's family were living at the time. The material is pretty much a run through of the set from their debut gig at the Castle Hotel in Bangor that same week, but with the addition of an out-of-character cover version of Herman's Hermits' "It's Alright Now" which thankfully never made it to the group's live repertoire!A Silly Tree - Pen-Y-Bryn Manor, Abergwyngregyn, North Wales
Saturday 2nd August 1980
Mark Creathorne - DrumsAlan Holmes - Guitar (4-8) / Bass (1-3, 9)Gary Stubbs - Vocals / Bass (4-8) / Guitar (1-3 / 9)1 Dancing Partners (Holmes/Stubbs) 5.522 Isn't Life Such Fun? (Holmes/Hycz/Stubbs) 3.023 Only Grey (Stubbs) 3.284 Big Time (Stubbs) 5.125 Surfin' 63 (Creathorne/Holmes/Stubbs) 6.106 Accusation (Creathorne/Stubbs) 7.307 Hazard (Holmes) 2.178 Still a Problem (Stubbs) 6.439 It's Alright Now (Noone/Hillary/Most) 2.57get it here
Posted by the archivist at 10:19