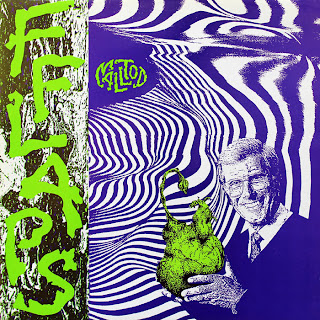 Following the release of their debut LP Amhersain, Fflaps went into a period of intense activity, playing 59 gigs between then and the release of this follow up. Notable highlights were a tour of Germany and a UK 'Three Nations' tour with Scotland's Stretchheads and England's Dandelion Adventure.

Malltod was recorded at Stiwdio Ofn in Rhosneigr, Ynys Môn by noted producer Gorwel Owen on the 13th and 14th of January 1990. The album had a much harder and more jagged edge than its predecessor, with the group's interplay tightened by 1989's constant touring. The album was released, again on the Probe Plus label, on the 8th of June at a joint launch party with label mates Levellers 5 in Liverpool's Planet X. As fate would have it, the launch clashed with a rare appearance just around the corner by avant-jazz deity Sun Ra which understandably diverted most of the city's hipsters!

The record again came housed in a striking two colour sleeve, this time in the form of a psychedelically surreal collage designed by the group themselves. The back cover once again reflected Fflaps' ongoing fascination with the communist bloc, featuring a road scene captured by the group while touring Czechoslovakia in 1988. The album's stand out track, Cornwyd Pellaf, dealt specifically with the recent revolutions in the region and included a news report of the execution of Nicolae Ceausescu on Boxing Day 1989. The group were to subsequently film a video for the song in the newly 'liberated' East German city of Magdeburg, when they visited the city on 21st October 1990. That trip also yielded further videos, with the group making promos for two new songs: Rhowch Hi i'r Belgwyr in Brussels on 18th of October and Hyll Eto in Berlin on 23rd October. These videos appeared in a travelogue directed by widely renowned film director Marc Evans who went on to greater prominence with My Little Eye in 2002. 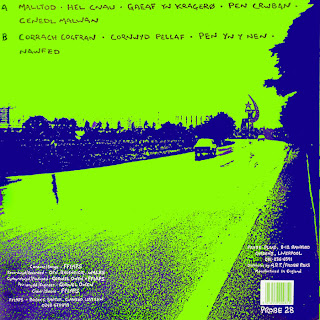 Nine days after the LP's launch party, the group travelled down to Maida Vale to record their second session for the John Peel programme on the 17th of June. Surprisingly, the group chose not to use the session to plug the new LP, recording three brand new songs instead with only the LP's title track appearing.

Note: for those of you who prefer to own the physical object, we have unearthed a limited quantity of original vinyl copies of both this LP and the follow-up which are now available to buy directly from Turquoise Coal here.