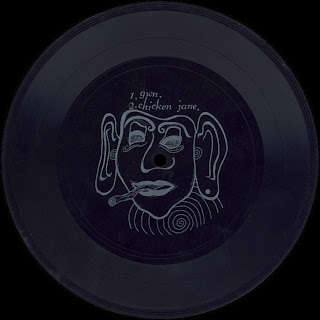 Back in August, we posted a 1988 cassette EP by Mold / Ruthin group Terry Waite ar Asid which proved to be quite popular with visitors to the blog. We mentioned that in addition to the cassette, the group had also released a split flexi disc with Ffa Coffi Pawb at around the same time. Gwion Llwyd from the group has now kindly provided us with a copy of that flexi from his own personal archive, which we present here in all its crackly glory!

Terry Waite ar Asid's contribution, Chicken Jane is slightly more melodic and jangly than the material on the cassette, while Ffa Coffi Pawb's track Gwn catches them in their early fuzz-bubblegum phase and would sit happily alongside such contemporaries as The Primitives and The Jesus and Mary Chain. Ffa Coffi Pawb released many other fine records over the subsequent few years, before singer Gruff Rhys and drummer Dafydd Ieuan went on to greater fame and fortune in Super Furry Animals.