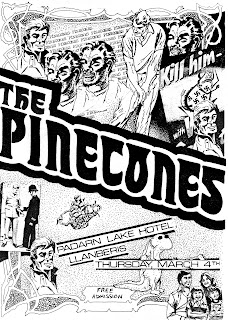 On Thursday 4th March 1982, The Pinecones travelled up into the hills to play what was to be their penultimate gig. It was a headline performance organised by the legendary Dennis Carr, better known as Denbo, who was later to achieve fame fronting north Wales' premier Cajun act, Cajuns Denbo. At the time, Denbo was promoting free weekly music nights at the Padarn Lake Hotel in the small mountain town of Llanberis at the foot of Snowdon and was keen to support a wide cross section of the local music scene.

The PInecones were arguably not on as fine form as recent incendiary performances at Plas Coch in Llanedwen and The Glanrafon in Bangor and tested the audience's tolerance with a more left field sound than the more down-to-earth boogie aficionados might have preferred. This recording however, is not without charm, faithfully capturing the rowdy ambience of the venue and the spiky edges of the Pinecones' final days. In addition, audience comments can be clearly made out in the gaps between the songs, making this an entertaining and valuable document of the period.

The Pinecones went on to play only once more, supporting local heroes Fay Ray a week later at the Victoria Hotel in Menai Bridge, but sadly no recording of this event is known to exist.